Loops provide the greatest benefits to people who rely on assistive listening systems, and to venues that are looking to provide the very best hearing accommodation. 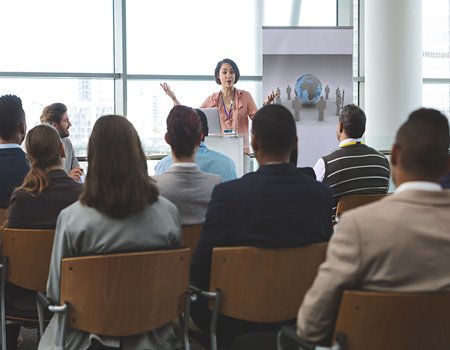 Loops installed to the IEC 60118-4 standard (International Electrotechnical Commission) reliably deliver the cleanest sound to people with hearing loss—even to those with severe to profound hearing loss. Because of this and the many benefits listed below, hearing loops have been the foundation for hearing-friendly, inclusive communities throughout the United States, Europe and now Canada.

Some of the many reasons hearing loops are the preferred assistive listening system by the majority of people with telecoil-enabled hearing aids and cochlear implants, and streamers:

To hear clearly, individuals simply switch their devices to the telecoil program and automatically receive clear customized sound. There is no need to arrive early, stand in line, or wait to return equipment after an event or meeting.

A hearing loop sends sound directly to the telecoil receiver in a user’s hearing device. The system eliminates most background noise and greatly improves understanding of speech and music. Additionally, the sound received is customized by each user’s unique hearing instrument.

Being able to hear well with a loop is inconspicuous; users do not stand out as being hard of hearing which encourages participation and inclusion.

For people with hearing aids and cochlear devices, there is also no concern over the sanitation issues associated with wearing headsets or ear buds provided by venues and worn by other users.

Hearing loops provide effective, seamless communication across the broadest spectrum of environments—from auditoriums, theaters and places of worship, to meeting and class rooms, pharmacies, ticket counters and even in users’ homes.

A hearing loop enables clear sound for a person with hearing loss at pharmacies, information desks, subway ticket counters, and taxis, or when passing through airports and train stations.

Ask Your Audiologist About T-Coils

The Impact of T-Coils

A 2014 study reported by Hearing Review asked 866 adult users of T-coil equipped hearing aids and cochlear implants to rate their ability to understand speech in places such as places of worship, theaters and auditoriums and conference rooms. 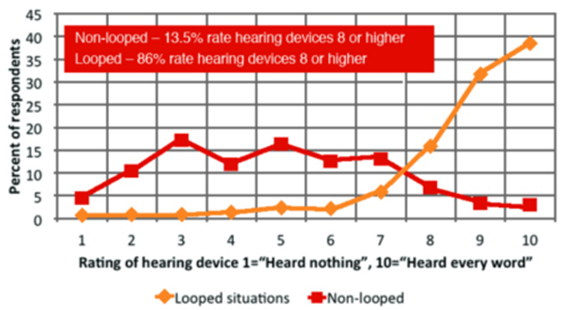 Because most users can connect to hearing loops directly, venues can reduce the assistive listening equipment needed for people without telecoil-enabled devices. This also reduces hygiene risks, because fewer people are using the same headphones or ear buds.

Once installed, hearing loops are always active—meaning they can automatically accommodate one or many thousand users simultaneously and without any additional action on the part of the venue.

Once installed, hearing loops require minimum maintenance. But more importantly, because of all the user benefits—a hearing loop is an assistive listening system that is actually used by people with hearing loss.

Hearing loops are the internationally accepted standard for providing hearing accommodation. The universal symbol that identifies a venue as being equipped with loop technology welcomes people with hearing loss and communicates that their needs will be met in the best way possible.

IEC standards exist to ensure the manufacture and installation of hearing loops meet the needs of both venue and end user. See below for more information.

How Do Hearing Loops Work? 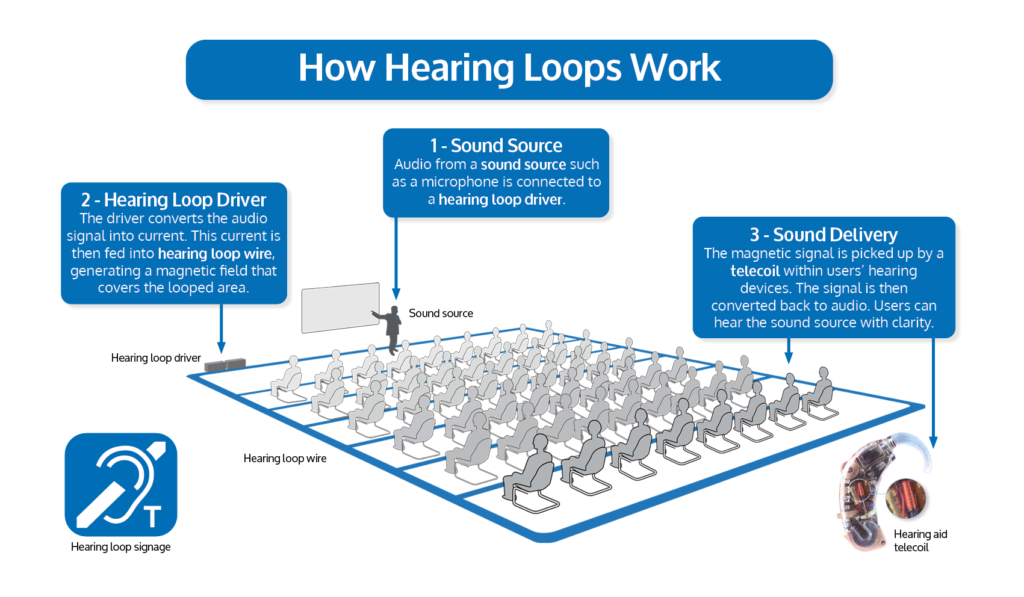 Technically known as Audio Frequency Induction Loop Systems (AFILS), hearing loops consist of a special amplifier and a hidden copper wire that transmits sound via a magnetic field. The wire creates a “looped zone” in any size venue from a large auditorium to a taxi. The wire sends the magnetic signal to any hearing device with a telecoil within the zone. A telecoil, or t-coil, is a small, inexpensive coil of wire inside a hearing aid that allows it to become a wireless receiver.

Consumer research indicates that, with the exception of the very smallest hearing aids that are invisible and fit completely in the canal, 81 percent of hearing aid models either come with t-coils or offer t-coils as an option. All cochlear implant processors have t-coils.

When buying a hearing aid, consumers should always ask that a telecoil be included and that the audiologist or dispenser activate the telecoil program at the time of fitting and explain its use. Note, although one can access a telecoil via a streamer, it is much easier to use if it is installed as a program in the hearing aid.

Loop Access for People Without a Hearing Aid or Telecoil Program

Hearing loop systems serve all people with hearing loss who wish to improve their ability to understand speech and sounds. As with FM and Infrared (IR) systems, hearing loops also offer accessibility via portable receivers and headphones or ear buds. You can also use a telecoil equipped streamer, personal amplifier or special telecoil-equipped ear buds and a smartphone.

When comparing loop system costs to alternative listening systems, consider this: a system that costs slightly more, but has many more users, will be most cost-effective. Hearing loops provide the greatest user satisfaction, are always used, and are preferred by staff because they are the easiest to administer and maintain. Also, loop systems require fewer portable receivers and headphones for those without telecoil-enabled hearing aids.

The cost of a looped system varies greatly depending on the location, size and construction of the venue. The following ranges are to provide loose estimates only:

Hearing loops generally cost less when installations are done as part of new construction or renovation projects. This is because it may be easier to identify and overcome potential obstacles and because floors and ceilings may already be exposed, reducing labor costs for installers who do not need to lift existing carpets or flooring.

A hearing loop should be considered an investment in the venue’s or community’s hearing access infrastructure.

Facility managers and decision-makers should choose only trained and experienced loop installers willing to provide references. Installers should confirm that the installation meets the international standard IEC 60118-4 as developed under the auspices of the IEC (International Electrotechnical Commission). This standard defines the strength of the magnetic field, the frequency response and methods of measuring these requirements. It also specifies the maximum levels of electromagnetic background noise.

For more detailed information about hearing loops and proper loop installation and maintenance, download the Hearing Loop Systems: A Guide to Best Practice for Service Providers. This guide, provided by the International Hearing Loop Manufacturers Association (IHLMA), has been designed to help to ensure that whatever investment is made produces the best possible results for both the venue service provider and the end user.

Loop technology was pioneered in Europe where it is widely embraced and highly successful. When hearing accessibility in the United States was made a requirement of law in 1990 under the Americans with Disabilities Act, no distinction was made between loop systems and less expensive FM or IR systems. Although the ADA did require that systems provide access to “effective communication,” people with severe to profound hearing loss – for whom FM and IR systems often fall short – were slow to mobilize advocacy for hearing loops.

In the United States, the ADA Standard for Accessible Design was updated in 2010 requiring that for renovation and new construction that at least 25% of receivers provided are hearing aid compatible—meaning that users do not have to remove their hearing aids to use the system. This dramatically raised the interest in and availability of hearing loops because loops are the only assistive listening systems that connect directly to telecoil-enabled hearing devices. The HLAA “Get in the Hearing Loop” communication access campaign has been an important catalyst in growing the number of hearing loops installed.

Over the past few years, Canada has made great strides in furthering accessibility legislation. We are hoping that with the help of the Get in the Hearing Loop communication we can help make Canada the global accessibility for the hard-of-hearing community – one loop at a time!

Hearing Loops in the US & Canada: A Brief History

In North America, consumer-driven, nationwide advocacy for hearing loops began almost 20 years ago when David Myers, Ph.D., a professor of psychology at Hope College in Michigan, attended a religious service in an 800-year-old Scottish abbey with a hearing loop. Dr. Myers discovered that by pressing a button and activating the t-coils in his hearing aids, the words of the minister came into his ears – directly and crystal clear.

Dr. Myers’s subsequent enthusiasm—along with pioneering advocates in several states—sparked a growing loop advocacy movement in the U.S. In 2010, HLAA, in partnership with the American Academy of Audiology, joined the movement by launching Get in the Hearing Loop (GITHL), a campaign that has now become an ongoing program for HLAA.  Over the years, the Get in the Hearing Loop campaign has heightened awareness around accessibility for the hard of hearing community and education on the benefits of hearing loops as the preferred hearing assistive technology.

With all of the great tools and resources available with the Get in the Hearing Loop communication access campaign – all stakeholders will now be able to continue to push and advocate for more and more loops as a way of creating hearing-friendly Canadian communities.